Parents usually want the best for their children but without knowing what they are buying they are in for a surprise. Recent research has shown toxic metals in 95% of  U.S. baby foods tested, including arsenic and lead which are detrimental to a baby’s health.

The investigation – which was commissioned by the non-profit Healthy Babies Bright Futures (HBBF) – tested 168 baby foods manufactured in the U.S. for four toxic heavy metals: arsenic, lead, cadmium, and mercury. These metals, even in trace amounts, can “alter the developing brain and erode a child’s IQ,” according to the report. Of the foods tested, the results showed:

About 25% of the baby foods tested contained all four of these heavy metals.

Even though often the amounts of heavy metals were in trace amounts the research team found that they could still alter the developing brain and erode a child’s IQ.

Specifically, the chart below shows the percentage of IQ drop from different foods laced with arsenic and lead. 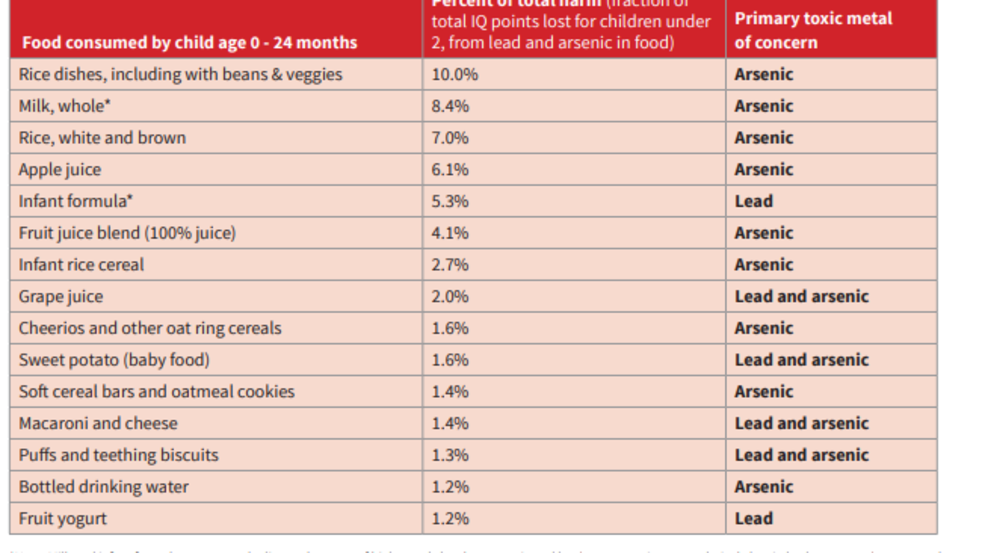 Results of IQ analysis: 15 foods account for 55% of total IQ loss from children’s dietary exposures to arsenic and lead in baby food (HBBF)

The chart below shows 5 common baby foods that usually contains heavy metals and the safer alternatives that parents can choose that can drastically reduce the amount of these toxic metals. 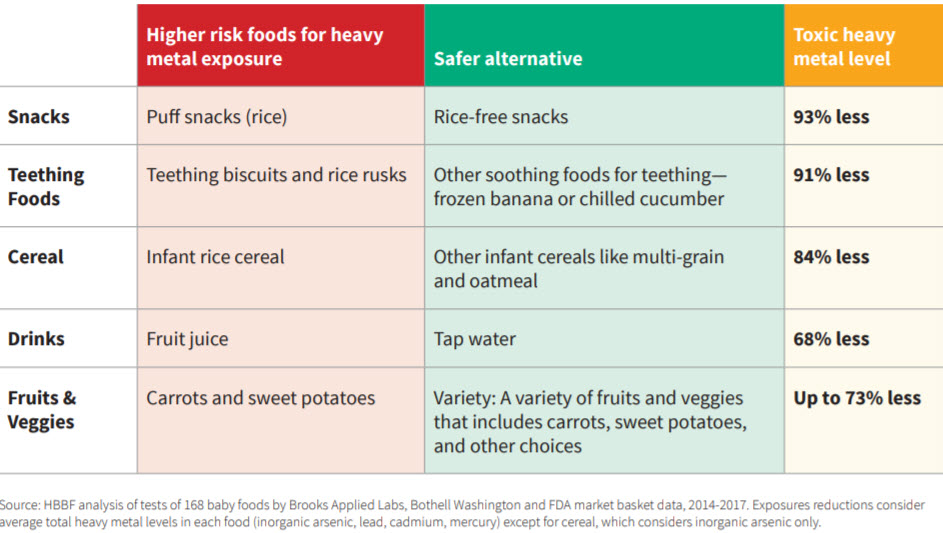 New research has indicated the detrimental effects on the baby’s health, including cancer and lifelong deficits in intelligence from exposures to these common food contaminants. Despite the risks, with few exceptions there are no specific limits for toxic heavy metals in baby food.

For at least a decade, health experts and advocacy groups have publicly raised concerns about the levels of toxic metals in baby food, and in 2017 the FDA established the Toxic Elements Working Group to reduce toxins in baby foods “to the greatest extent possible.” Because of efforts like these, toxin levels in baby foods have dropped significantly in recent years.

Current arsenic contamination levels in rice cereal and juice are 37 and 63 percent lower, respectively, than amounts measured a decade ago because of companies’ success in reducing metals levels in their food ingredients to comply with draft FDA guidance.

They have shifted growing and processing methods, switched plant varieties, and sourced from cleaner fields. Despite the gains, this study has shown toxic metals in 95% of the U.S. baby foods tested had detectable levels of one or more heavy metals suggests that we have a long way to go to protect our young ones.

But the baby food company Gerber noted that “many food safety and agricultural experts suggest that it is not feasible to achieve a ‘zero’ level of these elements – even in homemade foods made from organic ingredients.”

Reading this article, one can conclude that heavy metals are everywhere and very difficult to completely avoid these days – however careful we are with our food choices.

In order to prevent the damaging effects to health from toxic metals, it is important to undertake a natural toxic metal detox. The question, is what is the best choice as there are so many detox products on the market? And particularly a gentle heavy metal detox that can also be taken by children.

It is best to eliminate heavy metals naturally using a proven heavy metal cleanse such as HMD™.

We recommend you take the HMD™ Ultimate Detox Pack which contains the HMD™ (Heavy Metal Detox) as well as LAVAGE, a herbal drainage remedy and organic CHLORELLA.

This can be used by all the family and there are also children’s dosages too.

Toxic Protein Powders Most people incorporate vitamins or nutritional supplements into their diet to enhance their health. But if you regularly consume... read more

HEAVY METAL DETOX It is well known that exposure to toxic heavy metals is one of the root causes of... read more

A Spoonful of Lead

A Spoonful of Lead An interesting study was recently published in January 2019 in the Journal of Public Health Management... read more

Eliminating Heavy Metals There is a lot of research conducted by toxicologists that has shown that heavy metals are indeed... read more

EFFECTS OF HEAVY METALS ON HUMAN HEALTH There are 23 heavy metals that are of concern to the health of... read more

Remove Metals From Body!Whoever has looked at the detrimental effects of heavy metals in the body will realise that... read more

Heavy Metals in Your Fruit Juice

Heavy Metals in Your Fruit Juice! Do you drink a lot of fruit juices that are supposed to be healthy... read more

Heavy Metals and their Hidden Sources

Heavy Metals and their Hidden Sources When it comes to toxic metals, ignorance is not going to help your health... read more

Hello, and welcome to our site. My name is Dr. George Georgiou and I would like to share my personal story with you. I believe that natural health and detoxification saved my life – now I want to help other people get healthy too...

This website uses cookies and asks your personal data to enhance your browsing experience. Find out more.